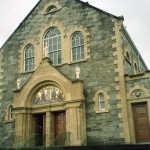 St. Columba’s Church, also known as the Long Tower Church, is located outside the walls of Derry in Northern Ireland. It was called the Long Tower Church because it was built near the site of a round tower associated with the old monastery that had once occupied the site. (Some believe that the tower referred to a wind mill, also associated with the monastery, that was used as a bell tower for the earlier churches)

The Long Tower Church is dedicated to St. Columba, who many believe established the monastery near its site around 546 AD. St. Columba was born in Gartan, Donegal, in 521 AD to royal parents and descendants of the chieftain, Conal Gulban. His monastery church was known as Dubh Regles (Black Church) und was made of wood and wattle. Dubh Regles and the monastery were located near present day St. Augustine COI.

From Derry, St. Columba established other monasteries throughout Ireland. In 563, he travelled to the island of Iona (in present day Scotland) and began a monastery that brought Christianity to the native Picts. He died and was buried there in 597 AD.

The Dubh Regles church was burned in 788 and sacked by Vikings in 990. Before being destroyed by fire in 1166, plans were already made for a larger church to be built nearby. Eighty houses were cleared for the building of the Teampall Mor (Big Temple). The church was finished in 1164. It became the mother church of the Diocese of Derry when the diocese moved from Maghera to Derry in 1254. In the 1500s, during the Reformation, many Catholic churches fell into ruin. Teampall Mor was no exception. For this reason, it became common for Mass to be celebrated outdoors. In 1566, the English garrison occupied the church when it was trying to put down rebellions by Shane O’Neill. In April, 1567, the ammunition stored in the church exploded, demolishing the building.

Bishop Redmond O’Gallagher partially restored Teampall Mor in 1590. These were dangerous times for Catholic clergy. The Nine Years War with the English was underway during the time Bishop O‘Gallagher was bishop. He lived under the protection of the O’Donnells in Fahan and only ventured into Derry occasionally. He was eventually captured and killed in 1601. Twenty-one priests were slaughtered when the English attacked during his funeral.

The 1600s and 1700s were difficult times for Catholics. In the late 1700s. the Penal Laws were finally winding down when the Protestants of Derry started feeling a bit sorry for the Catholics who had no place to worship. Mass was celebrated outdoors and in homes. The Parish Priest of Derry, Father John Lynch, said Mass at the Hawthorne tree that traditionally marked the site of Teampall Mor. Father Lynch believed that it was time to raise money to build a Catholic church in Derry and was able to convince the Protestant community to donate money for the project. Funds came from the Protestant Bishop of Derry and even the Council of the City of Londonderry. The building of the new church began in 1784 near the Hawthorne tree and former location of Teampall Mor.

The Catholic Bishop of Derry at this time was Phillip McDevitt. He did not live in Derry but in Clady, County Tyrone where he ran a seminary for Catholic priests.

Father Lynch was succeeded by Charles O’Donnell as Parish Priest of Derry. Father O’Donnell was the nephew of Bishop McDevitt. He lived in Father Lynch’s home on Ferguson’s Lane where he acquired adjoining houses to establish a seminary. In 1787 he succeeded his uncle as Bishop of Derry. Bishop O’Donnell, with the support again of the Protestant community, enlarged and beautified the Long Tower Church in 1810.

Bishop O’Donnell celebrated Mass at the Long Tower Church every Sunday. He was not loved by everyone in his diocese. O’Donnell was known as “Orange Charlie” for his close ties to the Protestant community and his stance on Irish nationalism. (This is discussed in my novel “Donegal Generations.”) Perhaps his ties to Protestant Derry made possible the many improvements he made to the Long Tower Church during his years as bishop.

Peter McLaughlin succeeded Bishop O’Donnell in 1824. Bishop McLaughlin made many other improvements to the church. Through the years, Long Tower has become a spectacular place to worship with too many features of beauty to point out individually. It is a place that should not be missed by visitors to Derry.

A relic of St. Columba’s time can be found just outside the church where is figures prominently in a calvary built in 1909. It is St. Columba’s Stone which was once located at St. Columb’s Well (down the hill from the church in the Bogside). It bears the impression of the knees of the many worshipers who prayed at the holy well through the 13 centuries since the time of St. Columba. 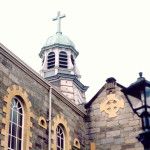 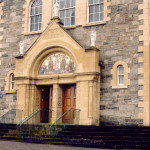 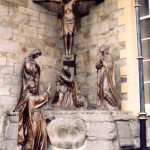 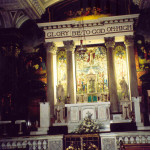 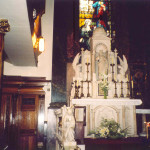 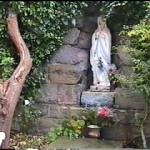 2 thoughts on “The Long Tower Church of Derry”