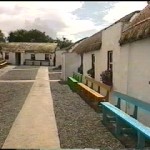 Doagh Famine Village is an attraction located on Doagh Island in the north-western part of Donegal’s Inishowen Peninsula. (Doagh hasn’t been an island for 6000 years. It is now a peninsula south of the entrance to the Atlantic Ocean from Trawbreaga Bay.)

The Famine Village has many exhibits from around the time of the Great Famine (1845). The homes and habitations of the poor, evicted victims of the famine are shown. Other exhibits of old Ireland are also featured, such as a wake scene, Mass rocks, hedge schools, an Orange Hall, a Presbyterian Meeting House, as well as an exhibit about the Irish “travellers” (gypsy/tinkers). A guided tour of the exhibits lasts about 45 minutes followed by tea or coffee with bread and biscuits. Visitors may remain in the village as long as they wish. Because many exhibits are outdoors, and this is rainy Ireland, visitors can travel on covered walkways to view the exhibits.

The photos below are from the Famine Village. Some of the dwellings of famine era paupers are shown:

1. Shows the eviction of a family from their home. A battering ram is ready to knock down the walls.

2. A One Room Cottage

3. A Scalpeen – A dwelling made in abandoned ruins with whatever material was available.

4. A cottage made from turf.

6. A typical wake scene in the 19th century.

The thatch-roofed buildings that make up the village were home to the family who operates the attraction, the family of Pat Doherty. The buildings had been occupied by the Dohertys up to 1983.

I recommend the village to anyone visiting beautiful Inishowen. It is usually open from St. Patrick’s Day to Hallowe’en between the hours of 10 AM to 5 PM. It closes in November to get ready for Christmas season and the “Ireland’s Lapland” exhibit with Santa and his reindeer.  See: www.doaghfaminevillage.com for details. 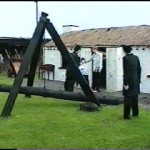 The eviction of a family with battering ram ready. 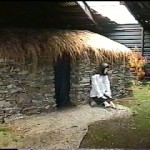 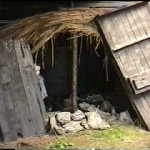 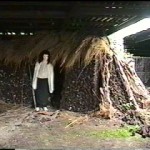 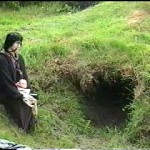 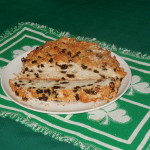 Grace Boyce (nee McFadden), my Donegal-born-and-bred mother-in-law, frequently baked scone that was served to her guests with their tea. One of her sons studied the way she mixed the ingredients and documented it for future generations. It is found below.

Form into a round loaf

(Batter should be sticky but holding together)

Spread batter on greased pan with sprinkling of flour

OK… Now you can slice it and have it with a “cuppa tay!”

Note that Grace always pronounced the word “scone” as most Irish do…it rhymes with “gone” and not like “bone” which is how most Americans pronounce it. How do you pronounce it?

Many other scone recipes are available if you search on: 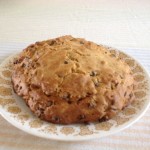 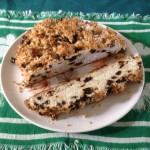