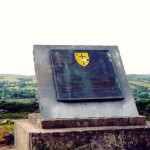 Old Ireland  was made up of four provinces or kingdoms: Ulster in the north, Leinster in the east, Connacht in the west, and Munster in the south. A 5th province was established when Tuathal Techmach, high king of Ireland in the first century, made Tara the royal capitol and established a 5th province, the royal province of Meath in the midlands. Today Meath is a county in Leinster Province and Ireland has only its four original provinces. Today’s counties of Donegal (Tir Connail) and Tyrone are in the western regions of Ulster Province.

There were many clan chieftains or kings though out all of the provinces in Ireland. The clans fought constantly over land and cattle. The king of Meath was known as the High King of Ireland and he tried to assert his authority over the entire island. He raised armies and settled disputes where he could. The title High King was usually in name only and frequently all he really ruled was the royal kingdom of Meath. In the first century, the palace of the High King was located on the hills of Tara.

The history of Donegal and Tyrone is tied to a High King who ruled in the 4th century. His name was Niall (of the Nine Hostages). Two of his sons became clan chieftains of western Ulster and three other sons became chieftains of southern Ireland.

During his raids to Roman Britain, Niall captured many slaves and sent them to Ireland. It is believed that one he captured was the child, Succat, who later escaped to Britain, became a priest, and returned to Ireland as the missionary known as St. Patrick.

Conall Gulban was the son of the High King Niall and received his share of the family’s conquest in north-western Ulster in 425 AD. He ruled over Tir Conaill (Land of Conall). His descendants, known as the Cenel Conaill, formed one of the principle branches of the Northern Ui Neill, and until the 12th century their chieftains were inaugurated at a bizarre  ceremony involving the sacrifice of a white mare at Doon Rock near Killmacrenan.

During Conall’s reign, Christianity became the dominant religion of the country through the efforts of St. Patrick. (St. Patrick baptized Conall). It is believed that when St. Patrick met Conall, he made a cross with his staff on Conall’s shield and predicted that his people would never be overcome in battle if they carried a sign of the cross on their standard. (Actually some believed that Patrick gave the cross to Conall’s older brother, Conall Cremhthainn). The cross became the coat of arms for Conall’s descendents (the O’Donnells) with the motto “in hoc signo vinces” (under this sign shall you conquer). It later became an emblem of  County Donegal.

Conall Gulban’s descendants became the chieftains of Tir Conaill (Tyrconnell/Donegal). They ruled from a crannog fortress in Gartan Lake. The O’Donnell descendants later built a permanent fort at Ramelton near the mouth of the Lennon River on Lough Swilly. Stone castles came later.

The chieftains became known as the O’Donnells after Donnell the Great defeated the English in the year 1210. Surnames became necessary by then and his successors took the name O’Donnell. Some of his more famous successors were:

Red Hugh O’Donnell II – ruled 1592-1602 (He joined forces with Hugh O’Neill of Tyrone to try to end English domination of Ireland. Even with Spanish troops, the Irish were soundly defeated by the English at Kinsale in 1602.

King James I of England confiscated the lands of the Ulster Earls after the defeat at Kinsale. This was the end for the Irish chieftains. 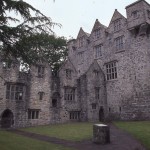 « Irish Memorial in Philadelphia
The Seat of Power – Lifford »

2 thoughts on “Chieftains of Donegal”