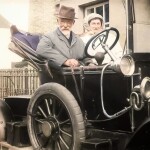 Dr. and Mrs. Johnston and Their Motor Car

During Ireland’s war with England in the 1900s, members of the IRA needed to get quickly from Glenfin to the Rosses in west Donegal, about 50 miles away. They had an idea to commandeer one of the only motor cars in the area to do so. It belonged to Dr. Johnston of Stranorlar. One fellow had the idea to telegraph Dr. Johnston that Mrs. Boyle of Glenfin needed immediate medical treatment. Mrs. Boyle lived near the Reelin Bridge, so the IRA threw up a barrier at the bridge to stop the doctor on his way to see Mrs. Boyle. When he arrived, the lads confiscated his car, and they proceeded to drive to the Rosses to meet up with the other troops. A song was written in honor of this actual event by Willie Gillespie (1883-1967) of Sessiaghoneill Townland (near Balleybofey) called “Johnston’s Motor Car.” The song became very popular and is sung today by Irish musicians in pubs and concert halls around the world. It was recorded by the Clancy Brothers, the Dubliners, and too many others to mention.