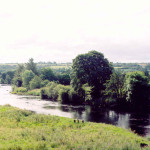 In 1876, Bella Brooks, a servant girl in Donaghmore Parish (Cavan Upper Townland), was seduced by a farmer’s son and became pregnant. When the lad found out about the pregnancy, he gave her chloroform and with the help of his father’s servant, managed to throw Bella into the River Finn. Her lifeless body was found the next day floating on the river. The police responded and the doctor and coroner examined the body. The locals believed that the doctor and coroner were bribed to conceal critical details of her death. It is not clear who, but either the doctor or the coroner met his death a year later.

Donnchadh MacCongaile, master of Tievebrack National School (in Donaghmore) in the 1930s documented a poem by Francy the Fiddler (Francis Kelly) about the murder. It was included in the Irish Folklore Commission’s project to preserve old stories of the past. The poem is shown below. A longer version can be found in Tony Gallinagh’s book, “A Long Journey in a Short Time.” (Browneprinters Ltd., Letterkenny)

The Murder of Bella Brooks

You tender-hearted Christians, I hope you will draw near,

I claim your kind attention, and I won’t detain you long.

It’s all about a foul murder that took place some years ago.

And how the crime was perpetrated I mean to let you know.

It was about three miles from Castlefin in the County Donegal,

There lived a farmer’s daughter, handsome, young and tall.

She had received some visits from another farmer’s son,

But he was sly and cunning too and soon her favour won.

He took her to his father’s home, a while there for to keep,

One night he gave her chloroform which caused her for to sleep.

And when he got her sleeping, he went to his servant man.

They hurried off to execute their wild and wicked plan.

But to continue some wicked deed, this fair maid to destroy

To steal her out alone at night between him and his servant boy.

They dragged her to the water’s edge and cruelly threw her in.

Next morning her lifeless body was discovered in the Finn

And the people were all shocked to hear that Bella Brooks was drowned.

The doctor, – he was sent for, to drag her to the shore

But human aid was useless her life to restore.

The police, – they were sent for and the news soon spread around

The coroner met to cruel end, and the people do me tell,

One night he got his neck broke, when off his gig to fell

They would have had this man arrested, by whom she was beguiled

And have him tried and punished

For the murder of their child.