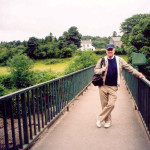 The first footbridge over the Finn from Ballybofey to Drumboe was erected in 1942 by the McMenamin brothers, James and Paddy. The brothers owned land on both side of the river. Prior to the bridge, the brothers used a row-boat to cross the river. The first bridge was built of shoddy material (because of the war) and collapsed within a year after it was built. Paddy McMenamin with his friend Joe Blee attempted to repair it, but both fell into the river while trying to fix it. The bridge was finally placed back in service in 1944 but was mainly used by the McMenamins on their daily milking runs. Public use of the bridge was discouraged. A locked gate was placed on the Ballybofey side. Chain link sides to the bridge were added around 1946. Later, the McMenamins gave in to requests by locals to use the bridge. In 1970, James’s son Charlie donated the strip of land linking the bridge to Drumboe Woods.

The bridge was closed after being damaged by a huge flood in 1984. It returned to service after the Donegal County Council agreed to repair and strengthen the bridge. It is now a convenient way to access Drumboe Woods from Glenfin Road on the Ballybofey side of the Finn.

Information about the Drumboe footbridge was obtained from the book, “A Long Journey In A Short Time” by Tony Gallinagh (Browneprinters Ltd , Letterkenny)

« Monellan Castle and Estate
The Murder of Bella Brooks »