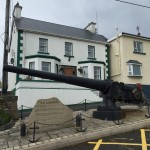 The SS Laurentic was a ship sunk during World War I in Lough Swilly. It was originally built as an ocean liner for the White Star line for passage between Liverpool and Quebec City. At the start of World War I, it was used as an armed merchant ship for transferring troops to Europe from Canada.

Under Captain Reginald Norton, it left Liverpool for Halifax on January 23,1917 with 479 passengers, mostly naval personnel, and 43 tons of gold ingots to purchase munitions from Canada and the United States. The ship made a stop at the Naval Base in Buncrana to allow four ill passengers to disembark. It then moved toward Fanad Head to pick up a destroyer escort to accompany it to Canada.

A blizzard at nightfall made visibility poor, and on January 25, the ship struck two mines in Lough Swilly and sunk within an hour. Those who made it to lifeboats rowed toward Fanad Lighthouse (http://tomgallen.com/2016/11/fanad-head-lighthouse/  ) in the freezing cold.  Of the 475 on board the ship, only 121 survived. Most of those in the lifeboats froze to death and bodies washed ashore for weeks after.

All but about 22 gold ingots were eventually recovered. One of the ship’s guns was recovered in 2007 and displayed in the village of Downings on the Rosguill Peninsula in County Donegal.

My niece, Jeannie Marie, visited County Donegal recently with her brother, her brother’s wife, and a friend. County Donegal was the homeland of her grandparents. Jeannie produced this video which includes many of her photographs. Jeannie has a website in which her paintings and photographs are displayed. The website is: at http://fineartamerica.com/profiles/jeanne-allerton.html?tab=artwork.  Prints, and other merchandise made from her images (including several of Ireland), can be purchased at this website. 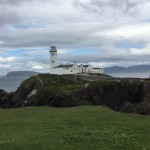 Beautiful Fanad Head Lighthouse is situated on the northern coast of the Fanad Peninsula in County Donegal between Mulroy Bay and Lough Swilly. It was determined necessary following the wreck of the HMS Saldanha on the rocks in December 1811. The only survivor of that wreck was the ship’s parrot who was wearing a silver collar engraved with the Saldanha’s name.

The lighthouse was designed by civil engineer, Gearge Halpin and lit for the first time on St. Patrick’s Day in 1817. The light shone red to sea and white to Lough Swilly. The light could be seen for 14 miles out to sea.

Fanad Head Lighthouse became electric in 1975 and became fully automated in 1983. It is one of 70 lighthouses protecting ships on the coast of Ireland.

Thanks to George Bonsall for the photos. 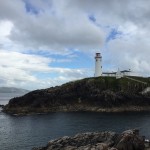 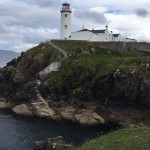 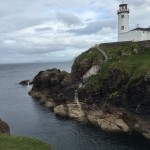 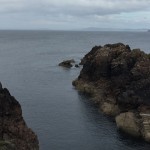 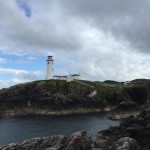