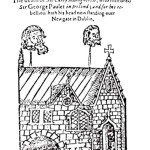 Cahir O’Doherty was the young Irish chieftain of Inishowen, County Donegal who began a rebellion with the English after the other powerful chieftains escaped Ireland in the “Flight of the Earls.” Those chieftains had just lost the Nine Years War and left Ireland to avoid English retribution. Cahir’s rebellion was brief but bloody.

In the years after 1200 AD, the rulers of Inishowen came from the O Dochartaigh (O’Doherty) clan. They protected their peninsula with a chain of castles. During Ireland’s Nine Years War with the forces of Queen Elizabeth (1594-1603), the ruler of Inishowen was Sean Og O’Doherty. O’Doherty maintained a friendly relationship with the English during the war, specifically with Henry Dowcra, the English Commander stationed in Derry. Sean Og died in 1601. His son and heir, Cahir, was only 14 years of age at the time. This was an opportunity for the Irish combatants to install an Irish ally as chieftain of Inishowen. Red Hugh O’Donnell of Donegal had Sean Og’s half-brother Phelim installed as Lord of Inishowen in February 1601.

Phelim’s reign over Inishowen was brief. Commander Dowcra and English supporters installed Sean Og’s son, 14 year-old Cahir, as Lord of Inishowen in May of 1601. Cahir’s foster father, Phelim MacDavitt, a loyalist, helped Cahir in making decisions. Red Hugh didn’t care for this situation and attacked Inishowen at Pollen Bay, but he lost in a bloody battle.

Cahir’s support of the English gave him the name “The Queen’s O’Doherty.” When the war was over in 1603, Sir Cahir O’Doherty was knighted by Lord Mountjoy.

The Irish Earls departed Ireland in 1607. Cahir was foreman of the jury in Lifford who declared the Earls guilty of treason. The Earls’ lands were confiscated by the English, but most of Cahir’s were not. This created hard feelings with some of the English, who believed that Cahir should have lost more of his land and power. Also, there were rumours of a conspiracy that Cahir was planning to retake Ireland with help from the Spanish. His principal detractor was George Paulet who succeeded Henry Dowcra as Governor of Derry. In one occasion, they argued and Paulet slapped or punched Cahir.

Young Cahir quickly became tired of the hostility from Paulet and the English, and he went to Dublin to plead his case. He was surprised to find that he was arrested there and imprisoned for a number of days in Dublin Castle. He was released after posting a sizable bail.

After all these insults, young Cahir organized a rebellion in 1608 with the help of his foster-father, who was no longer a loyalist. This rash action was probably the result of his anger with his former friendly English allies, and with the confiscation of Irish land which was granted to English settlers.

He and his followers captured and burned the cities of Derry and Strabane. His hated antagonizer, Governor Paulet, was killed in the battle of Derry. He then captured Doe Castle in Donegal from the English.

Cahir’s rebellion was short-lived. He was killed near Doon Rock in Kilmacrenan just three months after the rebellion started. He was only in his 20s when he died. His head was sent to Dublin and displayed at Newgate.