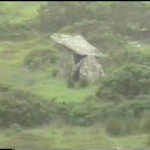 Dolmens are stone age portal tombs comprised of a flat capstone supported by two or more upright stones. It is believed that they were covered by earth or small stones after they were built, creating a cave for interment of the deceased. After centuries, the covering eroded away creating the structure we now see. There are about 190 dolmens in Ireland. Most were constructed during the Neolithic Period (4000 – 2500 BC).

The day I chose for visiting the dolmen in the Fanad peninsula of County Donegal was a poor one. Not only was it pouring rain, but it was the day the Donegal Road Rally was passing through Fanad, and many roads were closed. The dolmen in Fanad is just south of Kerrykeel (Carrowkeel). Still I made my way to Kerrykeel and followed directions to the dolmen. I saw it at a distance in a field with grazing sheep near Gortnaven and drove up a dirt (muddy) path to get close. Soon the dirt path turned to a path of large jagged rocks. I picked my way up so as not to scrape the undercarriage of my car or puncture my tires. Eventually I could go no further and had to stop. When I got out in the pouring rain to see if the car was damaged, I noticed the dolmen was still far away to the right. The best I could do was take a video of it using the zoom feature. The photo shown is a still from my video.

Better photos of the Kerrykeel/Gortnaven dolmen can be found at:

More information about Irish dolmens can be found at: http://www.carrowkeel.com/files/dolmens.html

« The Grianan of Aileach
Donegal Highlands »