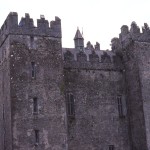 « St. Patrick’s Church of Ireland
Border Crossings During the Troubles »