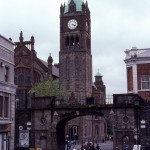 Walls were built around the city of Londonderry in the early 1600s to protect the English and Scottish settlers of Ulster from the “savage” native Irish. Londonderry somewhat reminds me of the US Cavalry post, Fort Apache in Arizona, which protected settlers of the American West. Londonderry’s walls certainly came in handy when the forces of  King James II attempted to take over the city in 1689.

Circa 546 AD, St Columba of County Donegal founded his first monastery on the River Foyle in Ulster. St. Columba, also known as Columcille (dove of the church), located his monastery in an oak grove (Daire in Irish), that gave the monastic settlement its name, Derry.

Moving forward into the 16th century… Ireland had been colonized by the English who claimed dominion over their neighbor island. An English garrison was located in Derry in 1566. A year later they departed when their stores of ammunition kept in Teampall Mor Cathedral exploded destroying the cathedral.

The English presence in Ireland was the cause of the Nine Years War between the Irish Earls and the forces of Queen Elizabeth. The defeat of the Earls led to their flight to the European continent in 1607. After that, King James I confiscated all of their land and began populating Ulster with supporters of the Crown. Large plots of land were granted to English and Scottish “adventurers” who were obliged to only have tenants of the Protestant faith. Other plots of land were granted to the Church of Ireland and servitors (soldiers and civil servants). The City of Derry was granted to the London companies. The name of the city was changed to Londonderry. In what was probably a bad idea for the new settlers from Britain, 20% of the total land confiscated from the earls was granted to “deserving natives” (compliant Irish).

The arrival of foreign colonists on their native land created great unhappiness in the Irish community. In 1608, Cahir O’Doherty rebelled, attacked Coleraine, and destroyed Derry. He was later shot dead in Kilmacrenan (County Donegal).

There was another rising by Rory O’Cahan in 1615. His rebellion was a complete failure. He and his cohorts were hanged, drawn, and quartered in the City of Londonderry. Their heads were placed at the city gates.

To protect its English and Scottish citizens from the savage Irish natives, a wall was built around Londonderry during the years 1613 through 1619. The wall was one mile in circumference with four gates to the outside world. Londonderry was now safe from the “bloody-minded villains” on the other side of the wall.

Londonderry was successfully defended by Sir William and Sir Robert Stewart during Phelim O’Neill’s bloody uprising in 1641. Elsewhere in that uprising, many Protestant settlers, including women and children, were massacred. The fear of massacres and Irish reprisals remained in the minds of Ulster Protestants for decades.

Then came Cromwell…His forces ended the uprising in 1652. Cromwell’s Act of Settlement that year almost obliterated the Irish freeholder. The native Irish then became the working underclass. Only laborers, ploughmen, and husbandmen were allowed to exist on the island. Rage was again building among Irishmen.

After King Charles II died, his son, James II, was crowned in 1685. James II was a Catholic convert. He immediately set about to right the wrongs that were done to Catholics in his kingdom. In a form of reverse discrimination, he promoted Catholicism and demoted Protestantism. The Protestants were not happy. Soon they were plotting James’s removal from the throne and crowning his Protestant daughter’s husband from the Netherlands. Meanwhile, the armies of James II were becoming mostly Catholic. He even appointed a Catholic mayor of Londonderry.

The garrison in Londonderry was Protestant in 1688 and commanded by Lord Mountjoy (Sir William Stewart). To replace the Protestant army with a Catholic one, Lord Tirconnell (Richard Talbot) ordered the garrison to leave Londonderry. In November 1688, the garrison left for Dublin. Tirconnell organized an army of Redshanks (6-foot tall Scottish-Catholics) who marched to Londonderry to replace Mountjoy’s troops. Meanwhile, a hoax letter was discovered by the citizens of Londonderry that indicated that the new garrison will massacre all Protestants in that city, recalling the 1641 uprising. In December, when the Catholic army was spotted crossing the Foyle, thirteen apprentice boys took matters into their own hands, seized the keys and locked the city gates. Seeing that he had no other reasonable choice, Tirconnell told his “Redshanks” to back-off. He ordered Mountjoy’s garrison back. By the end of December, the Protestant garrison was back in Londonderry under the command of Robert Lundy.

That same December, James II was deposed and escaped London for France. He assembled an army there which he took to Ireland. After defeating English forces in Dublin, he marched north with an army of French and Irish Catholics and arrived at Londonderry in April 1689. James then began his siege of the city. Before his arrival, the city had already expelled its Catholics and invited Protestants into its walls from the countryside.

The Catholics bombarded the city’s walls and gates while cannons on the city walls bombarded the Catholic army. During the siege, the governor of Londonderry and commander of the garrison, Robert Lundy, urged surrender. “No surrender” was the cry from its citizens. Lundy managed to escape the city; Reverend George Walker took over command. The long siege took its toll. Starvation and disease were prevalent.

Finally, Royal Navy ships arrived in June. By that time, a wooden boom had been placed across the River Foyle to prevent ships from supplying the city. The navy ships couldn’t smash through the boom, and they moved away to Lough Swilly. In July, three merchant ships arrived. With the help of sailors in a small boat, one of the ships broke through the boom. Although they continued bombarding the city and firing on the supply ships, the Jacobite army realized that they were losing. They finally gave up and retreated to Lifford.

James II was defeated by his son-in-law, William III, at the Battle of the Boyne in July 1690. He left for Dublin during the battle and eventually fled to France.

Londonderry is known as the Maiden City because, for all the wars and uprisings, no one was able to “penetrate” its defense. (I had to think about that awhile before I finally got it.)

The name of the city favored by Catholics and Nationalists is Derry. For Protestants and Unionists, it’s Londonderry. In print, it is a good idea to write it Derry/Londonderry so as not to alienate anyone.

Although it is located in Northern Ireland, Derry/Londonderry is considered the de-facto “capital” of the Irish north-west, including some counties in the Irish Republic (e.g. Donegal). It was the point of departure for many immigrants coming to America in the 18th and 19th century. 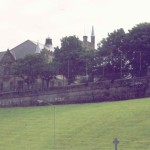 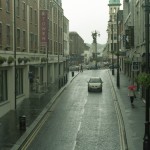 One thought on “Londonderry – The Fort Apache of Ireland”