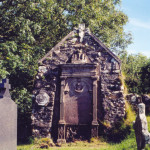 One thought on “Father Cornelius O’Mongan”